Pax Christi Catholic Community Church, located in Eden Prairie, Minnesota, has a large sanctuary with seating to  accommodate 1,500 worshippers. The AV crew at the church knew how important it was to supplement the weekly  services with presentations and image magnification to keep people throughout the sanctuary on track with the  worship services. They were noticing, however, that their congregation was increasingly struggling to see the media shown on their projection displays.

Growing demand for live event, production-quality services common with churches of their size could not be met with their outdated projectors, too-small projection screens, and too-few cameras to capture all the angles.

“Our old system was outdated. The screens were dark, the projectors were not sufficient, and it was hard to see what was going on at the altar when you were in some of the corners of the building,” said Ken Reineccius, Director of Operations at Pax Christi. “When COVID came into play, it became even more important because now we needed the livestreaming capabilities.”

The Pax Christi team quickly realized they needed to invest in a complete system overhaul, so they reached out to Bluum, a trusted technology solutions provider, to help them navigate the process.

Bluum sat down with the Pax Christi team to review their options. When making investments like an AV system overhaul, it can be priceless to ‘kick the tires’ of the proposed solutions. Bluum was able to show Ken and the Pax Christi board what high quality screens can do for the audience by showing samples in Bluum’s showroom.
“It is hard to explain how projection screens have evolved over the last decade, and by running through different scenarios with different projectors, the Pax Christi team left confident in their decision to invest.”

It was recommended that the church replace their standard definition projectors with high-definition Epson projectors to assist with legibility of lyrics and clearer image magnification of the pastor for those in the back of the sanctuary. Bluum understood that the quality of the screen surface was just as important as selecting the right size of screen to achieve the crispest image and to future-proof the system for many more years. They chose two Da-Lite Cinema Contour screens.

Pax Christi was familiar and happy with their Vaddio ProductionVIEW switcher they purchased a few years prior, and when exploring what was now important to their congregation, it became clear that a video production system that could facilitate streaming, graphics and paired with the newest 40x zoom cameras was going to get them to the experience they envisioned. Pairing two RoboSHOT 40 UHD PTZ cameras, a RoboSHOT 30E PTZ camera and the AV Bridge MatrixMIX production system allowed them to clearly pan across multiple areas of the sanctuary, like musicians, the pastor, the baptismal font, and pews. The ability to switch between cameras and PC content with the large touchscreen monitor, made previewing and setting up shots easy in preparation for displaying on the large projection screens. Wayne Olson, parishioner, volunteers his time to help run the camera system during funerals and easily got up-to-speed with the new equipment. 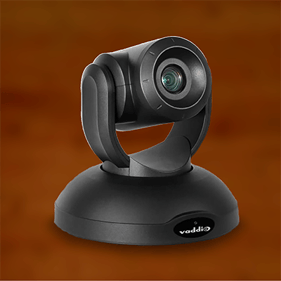 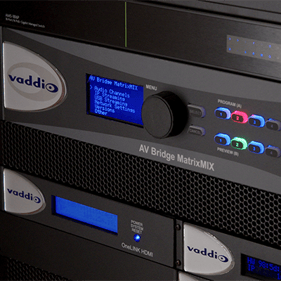 “The ease of operation is just, I can’t say enough about it. It works so easily and I’m not a technical person,” he said. “I enjoy using the computer, but, I’m no geek. Let’s put it that way.”

During the installation of the system, the COVID-19 crisis hit the United States and churches like Pax Christi were closed by local governments to slow the spread of the virus. Pax Christi was fortunate to have already set in-motion their AV system upgrade. Their new MatrixMIX production system, with multiple PTZ cameras, allowed them to maintain their services and reach their large community more quickly than if they had to design a system and find equipment after the shutdowns occurred.

Since starting the livestreaming services, Pax Christi has been able to build and foster connections with not only people at home, but those who have relocated for the winter or moved away from the area.

“We do the livestream and have the comments section on the side, and some of the comments have been especially touching from people that have reconnected and feel like they’ve come home,” said Ken. “We’ve seen people watching from the Philippines, from Japan, from all over Europe. So, the reach has been amazing to all of us.”

They are already fielding requests to add a fourth camera to dedicate to an American Sign Language interpreter to assist those who are hearing impaired to follow more closely. The new projection screens also received great reviews. “It’s kind of like going from black and white TV to color,” said Wayne. “These pictures from the cameras and these new screens are just really, really sharp and clear, and so it’s so much easier to see what’s going on.” “Some of our hearing-impaired people have commented on how they can actually read lips on those new screens,” Ken said. “We love the new Da-Lite screens.” Ken said the whole experience has him convinced they will never go back to just having in-house services, and that masses will always be livestreamed.  “We’ve always prided ourselves on reaching out, but this is reaching out in a whole new way,” he said.